What is clicker training?

Modern trainers use clickers to train their dogs because it aids in the animals understanding of what is rewardable. The animal quickly learns that when it offers the behavior again, it will be rewarded. This positive reinforcement approach will often cause an immediate “wow” moment for both handler and animal.

The clicker is a small hand-held gadget that emits a sound when you press it.  The sound the clicker makes is a signal to your dog that the behavior it just offered is rewardable.  This “click” is always followed by a food reward. Think: Click and Treat!  Note, the clicker is NOT for getting attention.

Since the click is always paired with a food reward, we call this training positive reinforcement. There is no need to punish the dog for offering the wrong behavior, be patient and quickly mark the right behavior when it is offered.

Teaching your dog to sit, using a clicker:

Here is a video demonstration of me teaching my dog Pablo to target my hand and a novel object: Hand Target using a clicker

Why Does the Clicker Work?

Will you always have to use the clicker?

No, you can replace the click with a happy, “yes” once your dog understands the behavior thoroughly. It is not a tool that triggers behavior, it just rewards good choices so they are repeated!  For more clicker examples visit:   https://www.karenpryoracademy.com 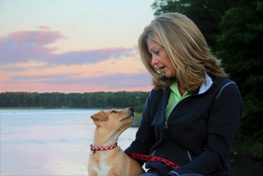 Do you wish your dog looked at you more? I could show you thousands of photos of me with dogs and the dog is always looking at me. Why? How is this possible?  Can you feel the connection in this photo? This was the day before I  let Chester go to his forever family, I wanted him to know he could trust people and they would keep him safe.

My secret?  I am good at mirroring a dogs awareness, at reinforcing  small behaviors I like. Tip: I never look at a dog and say “no!” as this makes the dog want to leave me. I have good timing, I reward quickly, and am generous with rewards.  I avoid letting the dog get frustrated because I reward small attempts from the dog toward the ultimate goal. This keeps the dog engaged and wanting to work with me. Tip: When a dog is aware of me, I let him know I am aware of him also, the connection begins here. 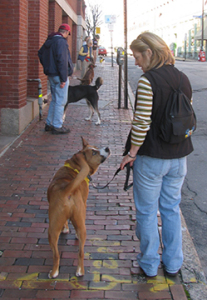 Pablo reorients to me with dogs in the distance.

I created a video of me training clients dogs, so you can have all my secrets! I am sharing these because I want you and your dog to have a better connection like I do with my own dog, Pablo.

Benefits of my Drop the Leash Video:

Click here to view the Drop the Leash Promo!

Order Your Digital Copy of Drop the Leash Here!

“Unbelievable! I learned so much and my dog is coming when I call him!”– Peter C.

“Excellent doesn’t even begin to describe Judy as a trainer! She’s helped tremendously with my reactive and nervous border collie mix Annie. She’s gone from a nervous wreck of a puppy to a cool and collective adult who can now interact with other dogs politely” – Olivia R.

“Unique and easy to follow along, I highly recommend this online class for families, reactive dog owners and anyone who wants to teach their dog to relax in more situations. – Sue B.

3 Tips to Changing your Dogs Habit

Tip #1 To change your dogs unwanted habit, you need to know what your dog loves! Once you know the reward your dog is willing to work for, you are ready to change his habit. The same reward may not work for all dogs.

Tip #2 To change your dogs unwanted habit, you need to add a marker, like a clicker or a “yes”, so your dog knows which behavior is rewardable.

Tip #3 To change your dogs unwanted habit, you need to offer the reward in a timely manner.  If your dog sits, rather than jumps on you, you mark the behavior and offer the reward quickly. Well timed rewards helps the dog learn that his behavior predicts his favorite reward, hence he will perform the desired behavior more often. Bonus Tip Initially, you reward your dog every time he offers the correct behavior. I know this is hard for many dog owners, but it will make a huge difference in how fast your dog changes his habit. Next, start randomly rewarding with the high value, but always let your dog know you are pleased with his new habit.  Over time, you randomly reward with what your dog loves, but always reward with something pleasant to your dog.  Positive reinforcement works for dogs of all ages, and is a great way to help your dog change his habits.

Management, as it relates to dog training  keeps everyone safe.  Management,  does not teach your dog a behavior, in fact it often creates frustration and increases arousal.  Using forms of management are useful when you need to prevent conflict, such as putting your dog in the bedroom when guests come over.  Using effective management tools, often buy’s you some time, as you teach and reward an alternative  behavior. I will fade the food lure quickly and simply reward when he offers a sit.

For example:  A leash is a management tool used to prevent a dog from jumping on someone.  In this photo, Gambits leash is a form of management, however I am luring this handsome 5 month old pup into a sit and rewarding him.  With some repetition, a person approaching becomes the cue for Gambit to sit if he wants affection or food wether he has a leash on or not.

Another example:  Grabbing your dogs collar when people enter the doorway is a form of management to prevent him from jumping or running out the door.  However, if you teach him an alternative behavior like a sit/stay then you will no longer have to manage.

One more:  Using a crate to potty train your puppy  is a form of management that keeps the puppy safe and prevents him from practicing the unwanted behavior of peeing on the floor.  Immediately rewarding your puppy with a piece of dried liver after each of the 6 or so times he pees in the grass will certainly be reinforcing, so he will repeat the correct behavior to get the same yummy reward! 3 of these pups are under 1 yr and learning to stay.

In Summary:  If your dog seems overly aroused, barks often, chases anything that moves, is displaying frustration or poor impulse control behavior, is it possible you are simply frustrating your dog through the over use of managment?

Consider teaching him what to do in each situation and reward him with anything he loves to reinforce positive behavior.  This will make you a proud parent and keep him from getting frustrated, all while building a better relationship!

Many of you have read Karen Pryer’s book, Don’t Shoot the Dog  It is an educational book for parents as well as dog owners.  After 20 years, Karen explains how the use of jackpots can work when used effectively.  The below insert is straight from Karen’s Blog and is worth reading: A non-contingent reward “just because.”

Remember, though, that no one is always right. We all keep learning things all the time, revising and adding to what we knew before. That’s one of the joys of science and a valuable phenomenon in the clicker training world.
Looking back at the jackpot section in Don’t Shoot the Dog, now, twenty years after it was written and six years after the revision supervised by Murray Newman, I think that I failed to differentiate between jackpots as I see them, and another tool altogether: the non-contingent reward.
A non-contingent reward is also something you get by surprise, but it is not associated with any particular behavior. One example in the book was the two free fish we gave to a discouraged dolphin, which perked her up and set her to trying to earn reinforcement again. Another example in the book was the ticket for ten free riding lessons that my parents bought me when, at sixteen, I was behaving poorly for weeks on end. It instantly corrected my bad mood. I included these as jackpots, but they were not; they were both examples of a non-contingent reward. The most powerful use of a non-contingent reward is to counteract the effects of an extinction curve; I know the dolphin in question was undergoing extinction of a bunch of operant behaviors; probably this sulky teenager was, too. Getting the news that good things are still available revived the efforts to seek reinforcement again.
Like the jackpot, a non-contingent reward is a tool to use rarely. And, like a jackpot, if it is going to work, you only need to do it once.
Read More
Sat05

Why is my dog so aggressive to other dogs?  This can usually be diagnosed with a detailed history: no play ever, hereditary, mother was sick or a guarder, or over socialized with aggressive or rough playing dogs.

Cycle of On-Leash Aggression (created problem from humans), as described in the Culture Clash, by Jean Donaldson, “The Bully dog” is often kept away from other dogs for long periods of time, he is usually rude with crude behavior brought on by a super motivated greeting as a result of deprivation when meeting other dogs, and has poor social skills.  The owner is alarmed by intensity and tightens the leash and get’s too excited or nervous when interactions occur.  High arousal, lack of social skills, scuffles with defensive dogs can occur.  Barrier frustration such as windows, fences and leashes can increase the dogs frustration which makes you want to “correct” the behavior,  which = punishment  which = more Aggression = total isolation.

I believe dogs need time to express their intentions before they greet unknown dogs.  Personalities among dogs differ as much as a classroom full of kindergarteners, therefore, expecting your dog to like every dog they meet is not that simple. Some dogs are very soft and have appropriate greetings, these are the dogs who are able to visit the beach and off leash parks without incident.

Helping your dog greet new dogs much slower will give your dog important and necessary information about the other dogs intentions.  To the left, you see the brown dog in the middle of this pack at a local park.  He is standing quite still with head lowered, visible tension in his jaw, mouth closed, low tail, ears back and a his hair beginning to stand up on his back.  He is very uncomfortable about being so close to a strange dog and was called away quickly to avoid any conflict.  This particular dog’s behavior tells us humans that he needs a much slower greeting with new dogs. 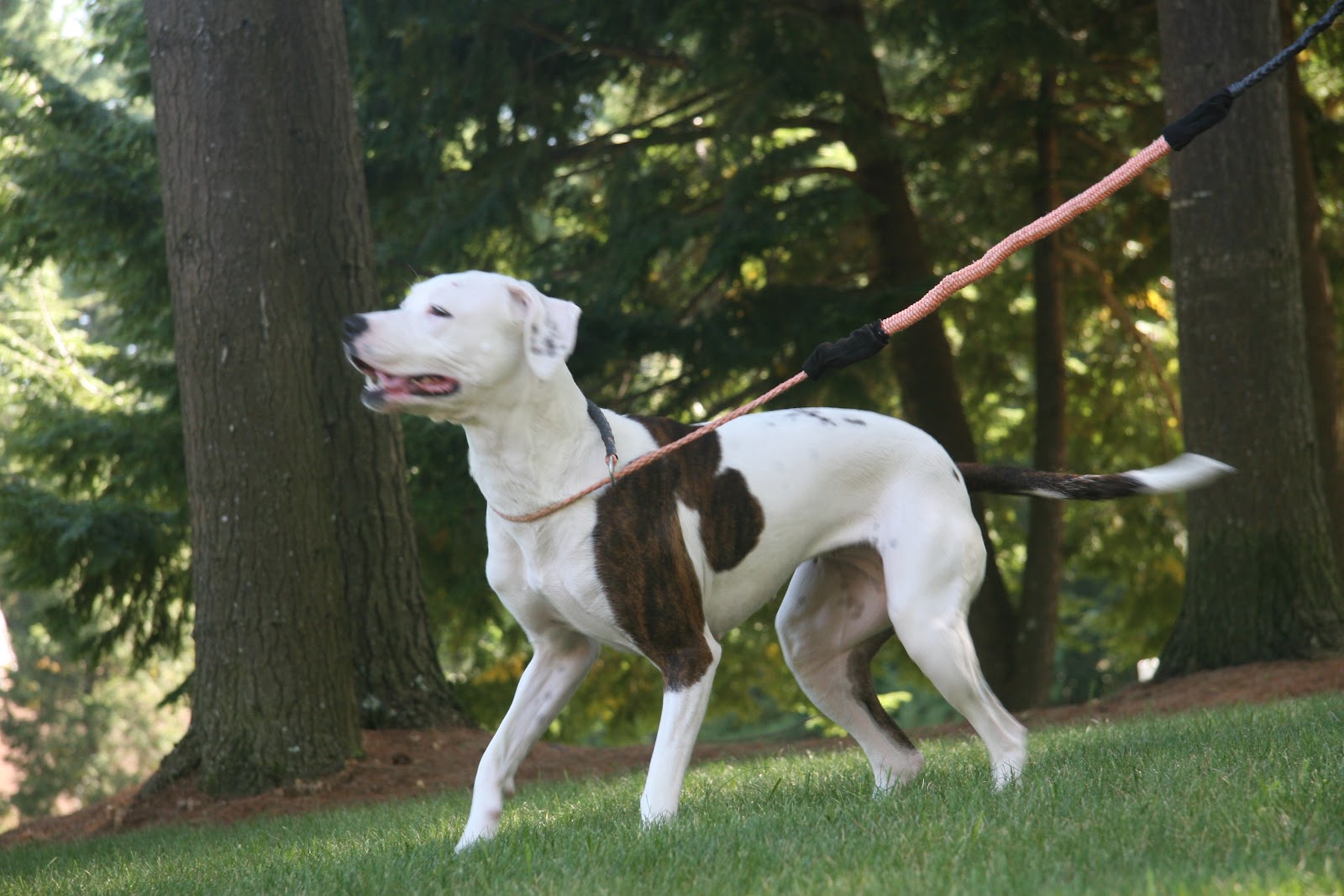 In this photo to the left , this beautiful girl has just seen a new dog and is reading the other dogs intentions and clearly expressing hers as well.  Note the open mouth and soft eyes, lowered tail which is in motion and she is beginning to offer a play bow.  While she is expressing intentions that she does want to greet the new dog, she is very excited and the other dog is a bit alarmed by her intense need to visit.  After about 30 minutes of walking near each other, this girl and the other dog became play mates as you will see in the video below.
If you have a new puppy, please keep him/her safe and find nice friendly dogs to socialize with.  Your dogs friends will influence his/her behavior! Just like you were influenced by those you visited with as an adolescent.  So, know who your dogs friends are and watch for signs of fair play between the two and you let’s try to prevent aggression from spreading.
Read More
« Older Entries