We have 3 different conversations going on in this photo.  Note the open or closed mouths.  Where are their eyes looking? How are the tails held? Are there any paw lifts? Do you note soft or stiff joints? How about forward or back or lowered ears?

Dogs communicate to other dogs using vocalizations and body language.

Many humans accidentally ask their dogs a behavior without even realizing it.  If your dog is repeatedly offering the wrong behavior, could it be what YOU are asking?

I once had a client whose sweet 5 yr old female Scottish Terrier was a problem barker, predictably when dad was on the phone.  I asked him what he had tried to stop her from barking, and here is what he said:  “I have tried yelling at her, walking in the other room, ignoring her and now I get some relief when I toss her a large dog biscuit as it takes her a while to eat it, but sometimes she starts right back up again.”

Did you know? If a dog does a behavior (like sit or bark) and if what follows is rewarding to the dog (attention or freedom) then the behavior will be repeated.  This is also true of humans! 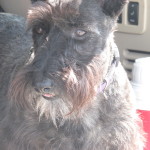 This Scottie learned that when she barked at her owner he spoke to her which was rewarding as she was able to get his attention.  Even negative attention is better than no attention for a bored dog. Then one day she just happened to bark while dad was on the phone and because he needed her quiet he tossed her a large biscuit.  The smart girl has now learned that when dad puts that box to his ear and she barks, she gets a Big Biscut.  This behavior will surely be repeated, by this smart dog! 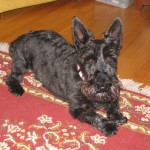