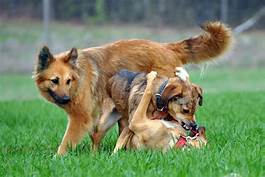 Good dogs resolve conflict — all by themselves!

Below, I outline an incident that occurred at a local park in detail and include what each dog’s body language indicated. There are good lessons here on how dogs resolve conflict and set the rules for the playground!

Here are the Players:

First we have Mo, a scruffy adolescent female terrier weighing about 20 lbs., who enters other dog’s space quickly and without hesitation. Next we have Nel, a shy adolescent female of about 40 lbs. who approaches other dogs hesitantly when greeting. Our third dog is a small 10 lb adolescent male named, Arlo who would sniff all the dogs and then run away and pee on the nearest tree only to repeat the pattern again. Finally, there is Ann, an adult 55 lb female who enjoys chasing squirrels mostly, and was extremely tolerant of other dogs sniffing her.

This is when it gets interesting!

This is an example of the scene, terrier closing space and insecure dog baking away.

Ann, Nel and Arlo had just politely greeted each other moments before when they spotted the gregarious Mo trotting towards them from a distance with head and tail up. From about 30 feet away, Mo began to sprint and squared off and growled nose to nose at Nel.  Nel stepped back about 6 inches from Mo when Ann stepped in with a reprimand. Ann chest bumped Mo right on her back.

This is when it gets noisy!

That is when it got noisy with both dogs growling as Ann stood over Mo and reprimanded her by holding her down with her mouth. I could see Ann’s mouth was open and was fairly sure she was not biting down. I quickly stepped in to separate the two, and Mo ran away.

This is an example of the scene, but not the actual dogs at the park.

Ann never even look at me, which was much appreciated as some dogs will redirect if they are too aroused. She was not. Ann immediately relaxed, and I do not even remember her shaking off. Next, Nel walked over and licked Ann’s face, possibly in appeasement.

This is when Mo should have stayed!

Mo’s mom was screaming at the top of her lungs saying what a bad dog Ann was and that Mo just had “poor social skills”.  I attempted to tell her to put Mo back down so that Mo could resolve the issue and learn from it.  I was certain that Ann was quite calm and had resolved the disagreement quickly.  But Mo’s Mom was upset, even though she knew that Mo was not even scratched. She left without understanding that her dog was the one that started the conflict and most likely learned an important lesson. Ann was truly just reprimanding Mo for being rude to Nel. Period.

This is my point:

If you own a dog that quickly charges into unfamiliar dogs faces and growls or gets even mildly stiff, avoid allowing this to happen.  It is a matter of time, before your dog “with poor social skills” gets put in it’s place by an adult dog who is confident enough to do so. You might complain that your dog was “attacked”. However, if there is minimal damage, it means your dog just received a reprimand for being rude. It is often just that simple. The adult dog should not be punished for reprimanding and setting rules on the playground.  Mo is clearly an insecure dog and selected the shy dog Nel to bully. Thankfully, Ann was there to keep the peace!

This is what you can do: Slow down the introduction. 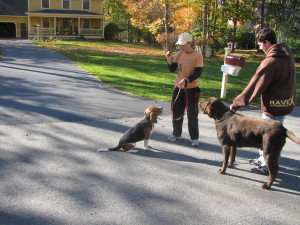 After 5 minutes, this beagle never looked at the lab. The bagle was saying “no thanks”.

Begin by walking your dog toward the other dog on leash, but stop about 15 feet away and let the dogs communicate a few seconds. Call them away and repeat. The insecure dog will eventually learn to read other dogs cues from a safe distance as they mature. I use a very slow approach to be sure both dogs want to greet. If one dog is looking away, turning away, or ground sniffing, then you do not get any closer. However, if both dogs are still expressing loose body wiggles  after 5 minutes of parallel walking, then continue to get closer.

This is an example:

How to Introduce New Dogs